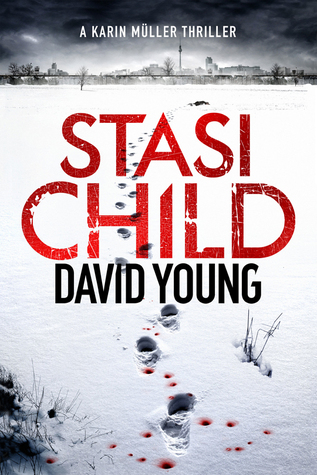 As soon as Marina Sofia mentioned Stasi Child, I knew I wanted to read it. She also has a wonderful post about mysteries set in dysfunctional societies, and the German Democratic Republic was one of those.

I do remember the DDR, from which you’ll probably guess my age if you’re curious. I went there as a child (toddler?) with my parents, in East Berlin, but I have just a vague memory of the zoo and of a tiny red swimsuit with a strategically-placed apple. I remember that we were supposed to study the DDR as a model of success for the Eastern block in middle school in 1988-1989, but somehow it dropped out of the curriculum as soon as it entered the television news on a daily basis. I remember watching the Berlin wall being pushed open on television. We knew things were gray and sad on the other side, but we didn’t realize what it meant to live in a closed country under the surveillance of anyone and everyone.

This mystery rebuilds the atmosphere of ordinary life behind the wall, or should I say, the anti fascist protection barrier. The Oberleutnant Karin Müller is called to investigate the death of a teenaged girl who seems to have defected… from the West. But even as she takes the case, she is warned that it is especially sensitive and that her every move will be under scrutiny from the political police, the in-famous Stasi. If it wasn’t enough, Karin has some issues at home as well, as her marriage is put at risk by her own behavior at work (working long hours and flirting with a colleague) and the political “doubts” of her husband. It gets worse and worse when the murder case makes her question the morality of the top leaders of the country, at the exact same time as her husband gets “disappeared” by the secret political police.

The novel had quite a heavy atmosphere and really gave me goosebumps. The air was stuffy and claustrophobic in there and there was nowhere to escape. I liked that Karin clung to her beliefs, the propaganda that had been instilled in her brain, that the West was bad and corrupt, and that the communist system was best even if more frugal. Even when she had a chance to take a peek at West-Berlin for her investigation, defecting doesn’t really cross her mind. There were tidbits of real shocking information that were woven into the plot (like IKEA furniture being made by political prisoners) and it was well worth reading. The ending was suitably nerve-wracking and twisted, complete with a nice cliffhanger, so I am quite eager to follow Karin Müller wherever her investigations will take her next.