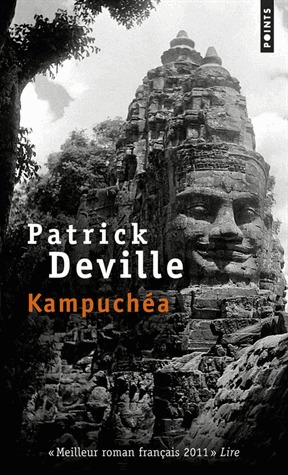 I feel myself a bit stuck in my creative writing right now, but luckily (ahem), there are quite a few books that I’ve finished and never got a chance to talk about here…

When I read my first Patrick Deville book two summers ago, a semi nonfiction about the man who had discovered the pest bacillus, I knew I wanted to read others. Still, Kampuchéa remained on my nightstand for nearly six months and it’s rarely a good sign.

But in that case, it just reflects the leisurely pace of Patrick Deville. The book feels like a travelogue,  but Deville isn’t the kind of traveler to visit a country in three days and he doesn’t let you hurry too much.

This book is an exploration of a country’s history, and the country that fascinated Deville also fascinated me, so I appreciated all the more his attempt to write about it and the difficulties of his project. Cambodia has a complex, tumultuous, multifaceted history, especially as the last centuries are intertwined with Western history and its ideologies.

Cambodia is stuck between Thailand and Vietnam, but always had its own separate identity. At its heyday, during the 12th century, the Cambodian kings built the famous temple structure of Angkor Wat , but the kingdom fell into decadence and now it’s a maze of sublime palaces lost in the jungle. Add to this geographic and ethnic uniqueness the arrival of colonial powers seeking to extend their area of influence. Cambodia was a hot prize to be taken by either the French or the British colonial empires, and the former prevailed (barely). Deville centers his book on Henri Mouhot, a French scientific explorer who discovered Angkor Wat almost by chance in 1860 and unwittingly changed the course of Cambodia’s history by putting it on the conquest trajectories of Western colonial empires.

During and after the French debacle in Indochina, Cambodia was pummeled by bombs as collateral damage of the Vietnam War. But when the communists took over Saigon, the Khmers Rouges installed a terror regime in Cambodia that makes Vietnamese regime look like Disneyland. They destroyed their very own country by indoctrinated blindness and millions of people succumbed until the Vietnamese kicked them out (not too far, just into the jungle) to conquer the land. Wikipedia says that Khmers Rouges are “responsible for the deaths of up to 2 million Cambodians (Khmer), nearly a quarter of the country’s then population”

Wow, here I am, trying to cram 2000 years of history into a blog post, while I ought to talk about the book itself. Which is not that easy.

Deville is trying to make sense of this history by being there and looking for all the layers of history, contradictory and half forgotten. Cambodian population is young and doesn’t know much of its past. It’s part a  travelogue, part an investigation, part fictional re-enactment of key history moments and figures. One question throughout the book is how the rise of Khmer rouges was possible at all. Somewhere down the line, the true question is if French colonial culture was somehow responsible for breeding monsters whose crazy ideal was to create an egalitarian utopia on earth at all costs.

But that question is very difficult to answer because Khmer rouges have left precious little information about themselves. They didn’t leave many (incriminating) documents and didn’t trust the written word altogether. During this crazy regime, people who knew how to read and write were already pointed out as a dangerous intellectual who wasn’t meant to live.

I visited Cambodia too and these questions haunted me too. It’s hard to look at this country and not to ask them. I feel lucky that I was familiar with the subject already when I opened the book, and I understand that readers with no prior knowledge may feel lost at sea, because Deville’s style is to mix past and present, images from the historical documents with scenes he witnessed on the road. Still, it’s worth sticking it out even if you don’t plan a trip to Cambodia anytime soon. Another recent and fictional take on Cambodia (with allusion to the recent past and the corruption and trauma that the country still endures) was Nick Seeley’s Cambodia Noir, which I enjoyed a lot too.

3 thoughts on “The one deep into Cambodia ghosts”