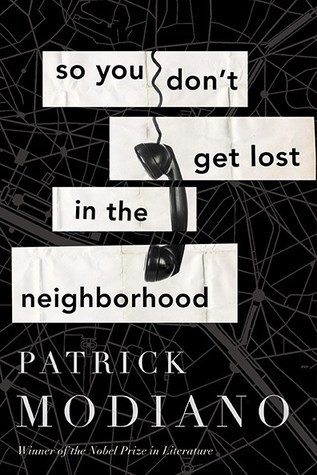 It’s been years since I wanted to try a Modiano, but I’m afraid I’ve started with the wrong one.

An old man, Mr. Daragane, spurred by a vague but uncomfortable phone by a stranger, suddenly remembers old memories of his childhood, names that don’t really ring a bell in an old address book, places he might have been to, people who might have taken care of him as a child. Everything is quite fuzzy, his memory is vague at best, and it’s not even clear why he (let alone I) should care.

I appreciated the reflection on memory and false souvenirs (which is exactly why I picked this one in the first place) and I liked the tone but I felt as if I was missing the point of the story. Perhaps there’s no point altogether, but this was a frustrating experience nonetheless. It’s even harder when it’s a national treasure and a Nobel Prize for literature and you feel you should a. be awed or b. just shut up about your own ignorance. I therefore choose c. try another Modiano asap.

The weirdest experience was perhaps when I visited the Goodreads page for this book (in the English version), which called the book a “haunting novel of suspense from the winner of the 2014 Nobel Prize in Literature”:

In the stillness of his Paris apartment, Jean Daragane has built a life of total solitude. Then a surprising phone call shatters the silence of an unusually hot September, and the threatening voice on the other end of the line leaves Daragane wary but irresistibly curious. Almost at once, he finds himself entangled with a shady gambler and a beautiful, fragile young woman, who draw Daragane into the mystery of a decades-old murder. The investigation will force him to confront the memory of a trauma he had all but buried.

I had to pinch myself to be sure we were talking about the same book. “Threatening voice” and “shady gambler”, I got them, but the mystery of a decades-old murder? I have completely missed that one. People called the book a “noir”, and I get that the book is totally atmospheric like a 1950s movie. Paris streets and buildings are right there on the page. I could almost see the grainy cliché of a beautiful woman with impeccable lipstick who would spend hours in a café staring into the void and playing with her cigarette in her (perfectly manicured) hand. But if “noir” has some components of sadness, inevitability, slow pace that are in the book, “noir” also normally has a plot and some truth to discover at the end.

Strangely, despite its title, I felt completely lost in the neighborhood. Only the familiar street names gave me some frame of references. But again, it might have been Modiano’s intention from the start. Intriguing and unsettling.

3 thoughts on “The One to Get Lost in Paris”