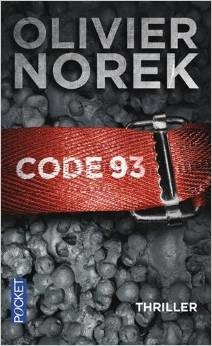 Olivier Norek, Code 93 (French 2014, not yet translated to English)

Ok, here is the challenge : I have 20 minutes before dinner time, do you think I can hit the Publish button with a whole post within this time frame? Perhaps, if I revive one of these half-finished drafts I have in my virtual drawer.

This book is definitely worth reviving a draft for. Actually, I’m a bit ashamed to post about it only now, since I read it at the end of… June (o.m.g!!) and was rather taken by it. But you know how it is. You’re 100% enthusiastic about a book and want the whole universe to discover this author, then days, weeks go by and you can’t quite put the finger on what made it so great.

Code 93 is a noir-cum-police procedural that deals with drug trafficking, seedy sex trafficking, thugs from the derelict housing estates around Paris, far from the nice neighborhoods and tourist places, but close enough that wealthy criminals and thugs at the bottom of the ladder occasionally cross. 93 is the zip code for this area, and believe me, everybody in France knows that it’s a badge of shame. Drivers with 93 on their license plate are insulted, job applications with address in the 93 are not considered seriously, the prejudice against 93 is real and causing deep injustices to the people who live there.

How did I come to pick up this particular book about this sad place? A conspiration, my friends. Not one nudge from the universe, not two, but three of them! After that, I could just pass it up.

The first one was a radio interview of writer Olivier Norek following his success at Lyon literary festival Quai du Polar. His voice was friendly, efficient, the kind of guy who knows what he’s talking about. Indeed, Olivier Norek was (or still is?) a police officer working in the toughest districts neighboring Paris. So you can’t deny the ring of authenticity that his novel has, which is all the more frightening as the crimes he writes about are not for the faint-hearted.

The second nudge came from Marina Sofia, who posted about this book in early June. Then I met her in real life and she praised the book once more, convincing me that I needed to check on it. The last nudge from the very persistent universe was to literally put the book into my hands when I had to shelve it at my workplace library. Duh!

The pace is impeccable, the main character, detective captain Victor Coste, is nice enough but complex enough to raise lasting interest (you can see it’s the first of a series) and the police office politics reminded me of the UK series “Scott & Bailey” or “No Offence” (with fewer female protagonists) both set in the difficult areas of Manchester. I’m not sure if anyone can make sense of the comparison between 93 and Manchester but you’ll get the feeling.

Very dark and gloomy. Compromises and corruption. Professionals trying to do their job in the worst circumstances. Amateurs of cosy crimes, this one is not for you, but for the others, Olivier Norek is someone to check out.

One thought on “The One with the Wrong Zip-Code”