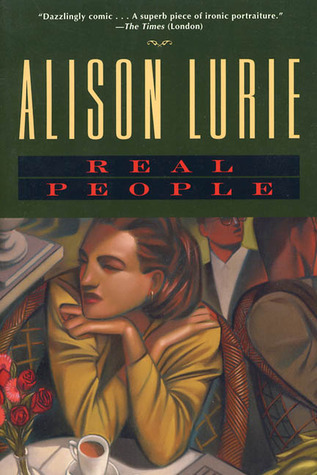 Wow. I had finished a string of books that left me between “meh” and “blah”, and I was starting to fear that it had something to do with me. And then, luckily, a book that grabs me and within days makes me feel and think at the same time. So unexpected! (Somehow, despite Alison Lurie’s reputation, I had feared that this book had aged… not at all)

Real People is set in the fictional artists colony of Illyria in New England (apparently very much inspired by famous Yaddo, near Saratoga), where Janet Belle Smith, a mid-range short story writer, has been admitted again for the summer. We readers get to read her diary.

I had read things by Alison Lurie in the late 1990s-early 2000s, pre-blog obviously, so I don’t remember what. But this book, short, highly readable, perceptive and funny, made me want to read her all over again.

It talked to me at so many levels. It’s both deep and funny, and when you start to wonder if it’s not a bit too cliché she surprises you with an abrupt switch or a deep observation. Obviously, I could not help but identify with the main character, the struggling short story writer, mother and wife. She brings her own insecurities and doubts and snobbery and naivety to the plot. She is forced to ponder how honest she can be in her writing, how honest about herself, and to wonder if she hasn’t been “too nice” in her writing as in her life. But at the same time she has this moral superiority about her that makes situations both witty and awkward for the reader, and that will certainly bring her comeuppance at the end.

Artists colonies are so fascinating, and I’d been wanting to attend one forever. I was lucky enough to go to one last year in June, with a small group of supportive women, and I wish I can go there again next year. I could not help but compare what goes on at Illyria and what I experienced last year. In Illyria, there’s a covert spirit of competition and a sexual tension. Artists in Illyria went there with something to prove, if not to themselves, but to the other artists and the retreat’s organizer. It might be okay for some people, but don’t think it’s quite the atmosphere I personally would need to create. I guess you go to an artist colony to be removed from the world, and if the colony recreates the usual stress of the world, it’s not worth going.

On a lighter note, it reminded me of another novel set in a writing retreat, an Ann Cleeve’s mystery, the Glass Room. And of course, there’s a body in the library…

6 thoughts on “The One with the Artists Retreat”