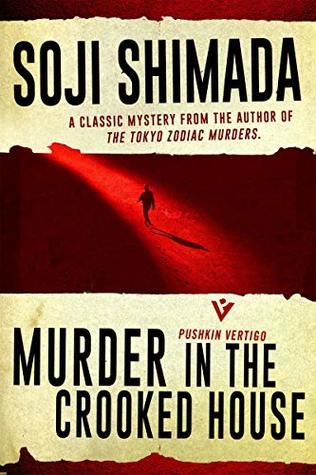 Locked room mysteries are classic intellectual games. You assemble a small group of diverse people who seemingly have nothing to do with one another, lock them up (remote island, storm, snow, whatever), and then one person dies in a locked room nobody had access to. Investigate, rinse and repeat. In most cases, the “how” and “who” takes precedence over the “why”. The reader has the feeling that he can play along and guess who the murderer is because he feels that he has the same level of information as the police has.

In this Japanese novel, a dozen people are invited to spend Christmas at the Hokkaido villa of an eccentric millionnaire. It’s on the northernmost tip of Japan, so expect lots of snow and ice foes (living in a moderate climate, I had to look it up). The house itself is crazy, with a leaning tower (à la Pisa), different staircases getting to different bedrooms, air vents and rooms that aren’t really level. Even though the description is quite thorough, the floor plan seems so bizarre that I couldn’t really picture it in my mind. I had a Netgalley ARC, and it would be nice if pictures or drawings were included in the published version.

Alas, the setting was probably the most important character in the book, as it entirely determined how the locked room crime was prepared and executed. I can’t say that Agatha Christie’s characters are always fully fledged, and the genre doesn’t require a lot of character development, but I found that the different suspects in this particular mystery were rather two-dimensional. The result is that many descriptions seemed fastidious to me, and the explanations at the end were far-fetched and implausible. It reminded me of the 1980s manga my son likes, Detective Conan. Still, I’m always on the lookout for mysteries written by other than American and British writers, so it was an interesting discovery.

I received a free copy of this book from the publisher via NetGalley, for review consideration.

2 thoughts on “The One with the Bizarre Floor Plan”