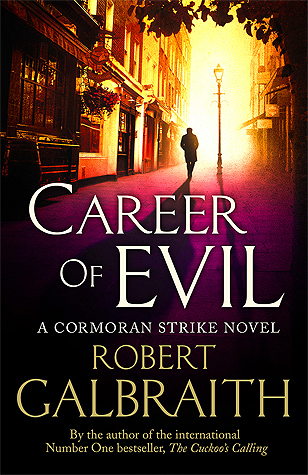 It was probably not a good idea to take this mystery as a summer easy read for the holidays. Not enough time had passed since I’d finished the previous book, which was entertaining (especially the satire of the publishing world) but not over-the-moon great. But the book did tempt me from its library shelf (in English version this time, since I hadn’t enjoyed the French translation of #2) and I took it home, and lugged it around on our annual family trip.

This time, J.K. Rowling is not making fun of a particular milieu: not the fashionista like the first book, Cuckoo’s Calling, not the publishers and agents like the second, The Silkworm. She “just” tackles violence against women in its every form, and well, it doesn’t have the fun, slightly tongue-in-cheek element of the other books. It is dead serious… and so heavy… and so long… and gruesome (serial killer, assaults, abuse and body parts included).

I nearly DNF this book so many times. But I was on a trip and didn’t have much else to read so I kept on reading, if actually skimming through many pages. If it hadn’t been a library loan I would have abandoned it in one of the holiday rentals. Yes, it’s that kind of book, sorry.

No amount of fondness for Robin will make it shorter, especially since from the get-go we have a choice between 4, very quickly down to 3 suspects. Those happy few are bad guys who have a long-term grudge against Cormoran Strike, which is the pretext for a stroll into memory lane. I don’t mind back stories, but I did find it so convenient – why only those 3? By the way, what is the correct plural form of Arch Nemesis? Nemesises? Nemesiss?

I was moderately engaged with the plot, but I did appreciate the developments of the relation between Cormoran and Robin, biding my time until she would become not a mere secretary, not an assistant, but would work on an equal footing with Cormoran (pun unintended?). Given that I don’t care for Robin’s fiancé Matthew, their on-off relationship was again grating on my nerves. I expected more from J.K. Rowling, especially on two points. First, that Robin’s secret-in-the-past has to do with sexual assault, because, ugh. Second, the very last scene, which is such a terrible cliff-hanger that no seasoned writer should be allowed to get away with that one.