Wow, only one month left to complete the yearly challenge! I used to say that I was not a book challenge person, but who knows? The best part is that it has been not *that* difficult, once I set my mind on it.

The logic is simple: I have plenty of books at home, gathering dust and waiting patiently for the day when all the libraries will be closed, and Netgalley will run out of new ARCs… which is (hopefully) never going to happen. So either I stop buying books (mmh, who believes this?), or I choose my own books over the ones at the bookshop and the library that are calling me so seductively.

How did November plans fare? Very well, thank you: Agatha Christie’s Sittaford Mystery was a hoot, I loved, loved, loved These Is My Words: The Diary of Sarah Agnes Prine, 1881-1901 by Nancy E. Turner, so much so that it made me stop another not-quite-as-enjoyable book.

I’d also added to my November list the 3 volumes of the manga The Ship of Theseus by Higashimoto Toshiya. They were great but I decided that I’m not going to invest into the complete 8 volumes series. 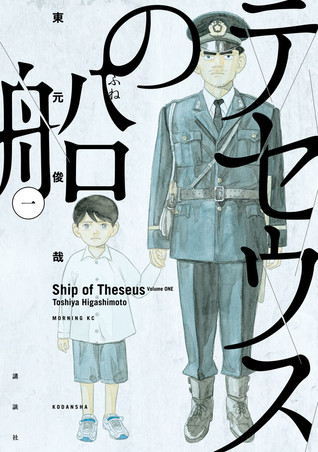 The Ship of Theseus has nothing to do with ships or Greek myths. It’s set in Hokkaido. Shin is a young man whose life has been wrecked by many tragedies. His wife just died in childbirth, and he lost the custody of their child after his in-laws decided that he was unfit to take care of the baby.

The reason behind it all is that Shin is the son of a policeman who has committed a horrific crime almost 30 years ago, even before Shin’s birth. His father’s crime, the fatal poisoning of teachers and students at the local primary school, has weighted heavily on the whole family, who had to change names and move from place to place to avoid public shaming and bullying. Shin’s father is languishing in prison ever since, claiming his innocence to no avail.

Shin decides to go to the now-abandoned village in Hokkaido, hoping to get a better understanding of what happened and if his father is really the sociopath monster everyone says. As he arrives there, he gets lost in the fog and when it lifts, Shin is suddenly in the village 6 months before the crime occurs. Armed with his knowledge of the future, he will try his best to stop the events from happening and discover the real killer.

This is not a big spoil, this is what happens in about 1/3 of the first volume. I really, really love the premise of this manga. I’m a late adopter for time-travel novels, but I love the mind games that this genre entails, especially as people meet their parents when they were different, or as people change things from the past with consequences for the future. I won’t say much more, but my main problem with this manga is that the pace was so slow. There were many repetitions and flashbacks. So I quickly finished the 3 volumes, and I’ve dropped it at my workplace library as a donation. If they choose to buy the remaining volumes I’ll probably give it another shot.

As for December, Whitney Conard has given the easiest challenge of all!

In December, your challenge is to read the SHORTEST book on your unread shelf by the end of the month – or put it in someone else’s Christmas stocking. 🎄.
This is a great time to tackle that tiny book you always think you’ll be able to read in a few days, but you never actually get to. (And for the type-As out there – don’t go all crazy counting all the pages in your books. Just find the one that looks the shortest and go with it! Don’t overthink it 😉).

I love this! I have just 3 thin books that I want to tackle:

I’m not even going to apologize for counting the pages. Wish me luck!