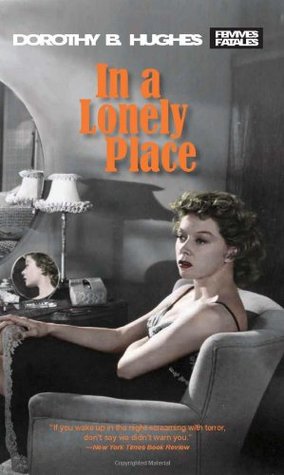 This book has been on my wishlist since 2016 and I can’t remember what had pushed me to add it, except that I already knew Dorothy B. Hughes and how good her noir novels are. Back in 2012, I’d read The Expendable Man and I’d loved it.

A dear friend sent me this book as a present more than one year actually, and I hadn’t exactly jumped on the book to finish it as soon as I’d started. In fact, I read the first few pages, took a deep breath, closed it and put it on my nightstand. In February, the #Unreadshelf challenge was to read a book gifted by someone and I took this as a nudge to be serious, at last, about this book. Still, it took me a while to get into the mood to read it and I finished it not long before the end of February, despite being a more 250 pages long.

No wonder, because the book puts you right into the mind of a very cold and disturbed man, and you don’t leave him until the last page. [Spoiler alert for the rest of the post] Dix Steele is the narrator, and there’s not much to make him endearing. He is certainly charming, he has his glorious days as a pilot in WW2 to talk about, but there’s something seriously wrong about him. He’s a loner, and despite trying to woo women and invite them in fancy restaurants, he seems to have no situation, no job and no real money other than what his uncle sends him, or what he manages others to give him. He’s a bit like Ripley (whose first novel comes out in 1955), and I wonder if perhaps Highsmith had read Hughes?

Dix Steele arrives in California to reconnect with some friends and to write a mystery novel. That’s what he says. But at the same period there’s a serial killer in California who attacks women, rapes them and kills them. I wasn’t sure immediately that Dix Steele was this killer, but as the book start you see him look for a lone girl and stalk her and it’s really chilling, even if there’s no killing and no graphic description of anything. Dix Steele is an angry man, and he’s a misogynist. It does not make for a comforting read at all.

Hughes writes extremely well though. She has some flash of brilliance, but the tone is mostly rather spare because it’s a “must” in the noir genre. She also conveys the progressive breakdown of Steele into a spiral of violent paranoia. Because of this choice of point of view, the book is a lot more disturbing than a classic noir like Chandler’s. It makes Philip Marlowe look a bit shallow and slow-witted in comparison.

Dix Steele is most threatened by the wife of his best friend Brub, Sylvia. I wish she had been more in the foreground, but making her an intelligent, active women and not a mere passive femme fatale, was probably already a big enough challenge to the genre conventions. Dix Steele is also attracted by his sexy neighbor Laurel, but he doesn’t love her, he distrusts her from the very start. In the end, Sylvia and Laurel are the ones who uncover the truth about Dix Steele.

There’s a great article by Megan Abbott about Hughes’ subversion of the genre in this novel.

One thought on “The One with the Post-War Killer”