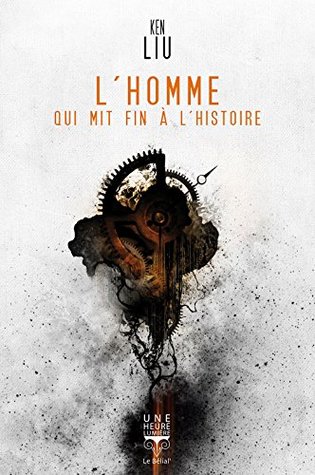 This slight novella, which I found (translated) on the SF shelf at the library (before the lock-down), seemed to have been an e-book in its original English edition. Indeed I would have enjoyed something in a much longer form.

I took it because of Ken Liu’s short story The Paper Ménagerie which was freaking amazing (if you don’t know it, go online, read it right now and return to my blog later, because you’re missing out). I knew nothing about the title, which seemed cool, and that is not exactly rendering the heart of the subject.

All this to explain I felt a bit lost when I started the book. The story is set in the near future, or in an alternate present time, when a couple of American scientists have developed a technology enabling people to witness some hours of a distant past they choose. Pretty cool premises, right?

But they don’t use it to, for example, witness a celebration of happy events. The male scientist is Chinese-American and his wife is Japanese-American, and they are obsessed with the WW2 history in Manchuria, when Japan annexed the land in the name of a fascist and racist ideology. Under the cover of medical experiments, Japanese soldiers committed terrible crimes against humanity at Unit 731, for which they were never judged or for which they never apologized. (This is my own comprehension of the historical facts, and I knew this well before reading Ken Liu’s story – I wonder how clear the historical facts are for someone who would stumble upon this without prior knowledge)

In the novella, the technology allows a few Chinese people to witness what happened to some of their relatives who died in the horrendous Unit 731, but the bulk of the book is the reaction of the governments, scientific authorities, colleagues and lay people to this possibility to revisit the past, especially a heavy past with long-time consequences. Instead of gathering kudos, the scientists get blamed, discredited and even ostracized.

Science fiction is here a mere pretext. It asks a lot of questions about our willingness to revisit the past (or not), our (in)ability to define a “historical truth”, whatever it means, our constant reworking of the past in light of present circumstances, our lies and silences and shameful compromises, and what would be the objectivity of history compared to the objectivity of science. It is subtitled a Documentary, but it much rather feels like the draft of an essay. There is so much material in these few pages and I would have loved to see a more complete story.

The final notes of the novella allude to Irish Chang. I’d never heard of her and it raised my interest. Chang, a Chinese-American historian, researched the 1937 Nanjing Massacre by the Japanese soldiers and campaigned for a fuller apology from the Japanese government. She committed suicide after being deeply depressed by her research subject.

This novella made me want to read more of Ken Liu’s stories, and I have an ARC of his latest short story collection lined up on Netgalley!

3 thoughts on “The One Returning to Japanese War Crimes”