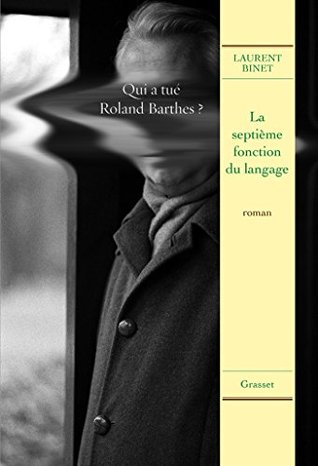 Here I am, reviewing the first of my January challenge books on the last day of February… The most important thing is that I read them in time, right?

Anyway, if you’re anything like me, you wouldn’t associate Structuralism and Laughing in the same sentence. I hope I won’t offend anyone if I confess that the bare minimum I learnt about Structuralism during my studies made me want to run for the hills, or sleep the whole class away. It bore me to death, but decades later, it managed to make me die of laughter.

I’m choosing a rather macabre vocabulary because this book starts with a death : Roland Barthes’ death in 1980, described in the novel almost like in the Wikipedia article. A random car accident, or is it really? The book takes the hypothesis that it was a lot more complicated.

It’s all about a big conspiracy, and secrets that promise to change the face of the world (but it’s not The Da Vinci Code), there are unlikely heroes, terrifying baddies and mysteriously sexy girls. Spies, sex, drug and rock and roll (or whatever people listened to in 1980). But it’s not James Bond, just a very inadequate and obtuse French policeman who recruits by force a graduate student / adjunct teacher fluent in Structuralism. In terms of investigating duos, it’s more Laurel and Hardy than Holmes and Watson.

The book is a lot about name dropping, and putting words into famous people’s mouth. Barthes, Derrida, Deleuze, Althusser, Foucault, Kristeva… whoever is in the literary analysis / history textbooks takes shape in the novel, often in the most hilarious ways. So I guess that readers who are not somewhat familiar with structuralist celebs or with French late 1970s – early 1980s politics and intellectuals will miss out on much of the fun. But my understanding is that French theory is better known in the US universities than in their French counterparts.

In real life, Roland Barthes’ death was almost coincidental to François Mitterrand’s election, the first Socialist president of France since the 1950s, which was a huge change (and somewhat of a surprise given that Mitterrand had lost previous elections and was not unchallenged in his own party). The novel links both events, and travels from Saint Germain des Prés to Nanterre University (a hotbed of flower power youth rebellions in 1968), from Italy of the darkest era to Cornell university.

Without being fluent in Structuralism, most names rang a bell and I was somewhat familiar with the historical context so I enjoyed the novel a lot. There are purely slapstick scenes, and also some laugh-out-loud dialogues. Mr. S. who is a bit older than me and can actually remember this era was laughing hysterically too. Consider it an official endorsement from us both.

One thought on “The One with the Structuralist LOL”